Tutankhamun, the famous ruler of Ancient Egypt, comes to life (after death) in Yggdrasil Gaming’s new video slot, “Tut’s Twister”. The world of bitcoin gaming has one more exciting story added to it: the epic tale of an old curse, potent magic, and, above all, treasure.

“Tut’s Twister” is the latest video slot game by Yggdrasil Gaming, an online casino game provider that is well known and loved for delivering the most awesome and engaging premium-quality games. The company has taken the players to the mysterious and perilous realms of Ancient Egypt before, with its 2017 slot “Valley of the Gods”. However, this time the story focuses on one particular character – Tutankhamun, the boy pharaoh who died at the age of 18 in circa 1323 BC.

Now, while the actual King Tut was afflicted by many maladies and died young before he could distinguish himself as a leader and a warrior, he became a mystical and sinister figure in popular culture after his tomb was discovered in 1922. “Tutankhamun’s curse” was said to bring imminent death to anyone who dared to enter the sacred tomb. Yggdrasil takes the macabre story further and blends it with the popular action movie plot. As a result, we have King Tut who has risen from the dead as a swathed mummy, wielding sword and magic, bringing chaos, destruction, and plenty of delicious multipliers for the lovers of bitcoin gaming.

The new slot that is now available at bitcasino has 5 reels, 4 rows, and 25 paylines. It can be played on all devices from 0.25 to 125 EUR (or an equivalent sum in bitcoins). The RTP is a promising 97%, and the maximum possible win is 125 000 EUR, 1000 times the stake. The low-value symbols are the traditional hearts, clubs, spades, and diamonds, and the higher-value ones are a papyrus scroll with mysterious hieroglyphs, a royal ring, a golden pendant in the shape of Horus, the falcon-headed god of sky and the Nile Delta, and, finally, a golden pot brimming with jewels. These symbols are worth 5.2x for 5 of a kind. Finally, the Wild symbol is King Tut himself, and awe-inspiring figure with eyes glowing ominous red.

The special features that boost your winnings to a kingly wealth are the Twister Feature, the Twister Collection Feature, and the Mystery Win. 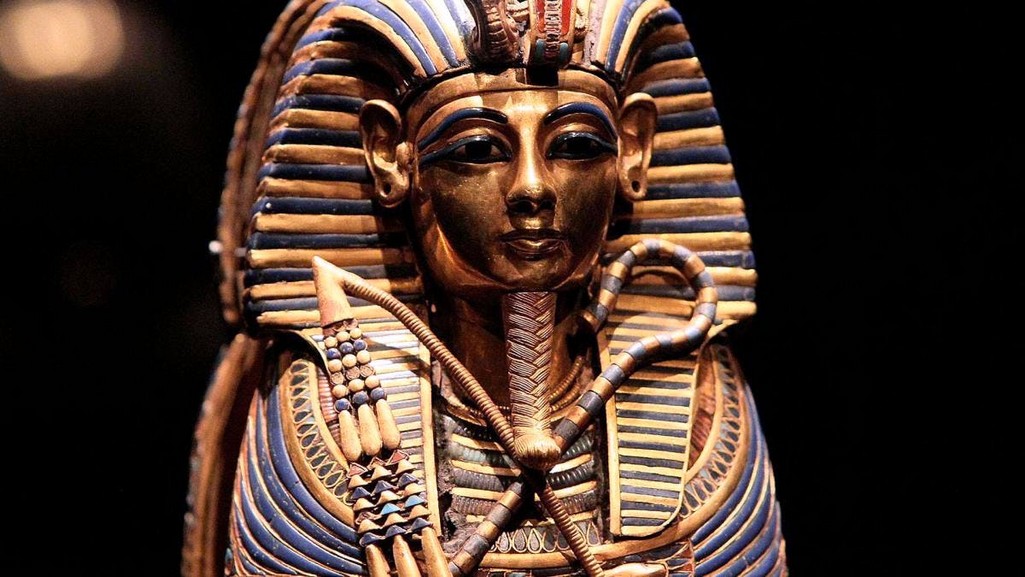 When two or more Wild king’s portraits land on the reels, Tut’s Twister Feature is triggered. The menacing mummy standing on your left comes to life and transforms a randomly chosen Wild symbol into a twisting column of sandstorm that sucks in other Wilds into its deadly vortex, while the reels keep respinning. Every Wild symbol landing on the reels during this mad action becomes a walking Wild and is consumed by the tornado.

If you are fortunate enough to get three walking Wilds, King Tut rewards you with a 2x multiplier on all spins that keeps increasing by 1 for every 3 new Wilds and lasts until the Twister ends.

The Twister goes on spinning while there is still at least one Wild symbol walking the reels. Once there are none left, you get a “last chance” spin so that you can attempt to get one more Wild and reanimate the feature. If that attempt fails, all the Wilds that have hitherto been consumed by the whirlwind are spread across the reels in random order, and the final sum of your win is evaluated using the same multiplier as was applied to the previous spin.

The blue stone slabs above the reels contain empty spaces in which golden hieroglyphs can be set: 3, 4, 5, 4, or 3 of these, from left to right. New hieroglyphs are revealed when one single Wild symbol lands on your reels. If the new golden symbol matches any of the empty shapes carved in stone, it is added to the collection. Once the set of hieroglyphs over a particular reel is completed, the Collection bonus feature can be activated.

When the feature is triggered, the mummy transforms a Wild symbol into a twister made of desert sand and ancient magic, and the respins begin. During the first of these, the golden hieroglyphs that belong to the trigger reel are hurled onto the reels in a random order (excluding the column occupied by the twister itself). The Wilds that have thus landed on the screen are then counted, with the initial guaranteed multiplier being 2x. Every reel then adds at least three Wild symbols, and, if there are any more Wilds, they become walking Wilds and further increase the multiplier. The reels then keep spinning as long as there are Wilds walking across them towards the tornado. 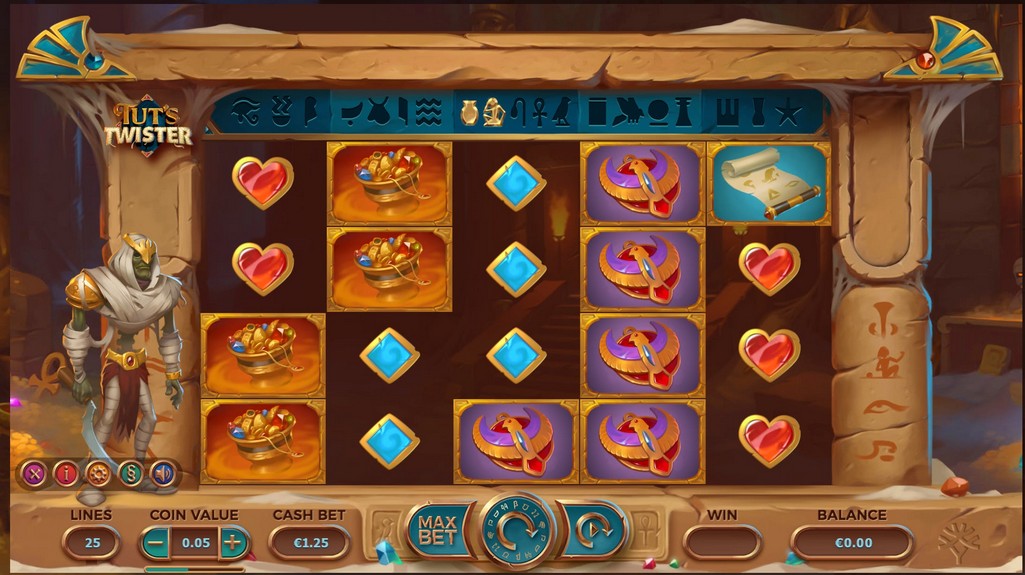 Besides adding hieroglyphs to your collection, a single Wild symbol that lands on the reel can award you with an extra Wild that triggers the Tut’s Twister or shower you with gold: the mystery cash reward is anywhere between 25 and 2500 coins.

Tut’s Twister in a Nutshell

The game’s trailer is a tiny action movie in its own right: the graphics and animation are simply superb, giving you the taste of the dynamics of the game; and it doesn’t get less intense when you start playing. The image is beautiful and laconic at the same time, creating the impression of luxury and letting you almost feel the gold heated by the Egyptian sun under your very fingertips.

The sound combines a non-intrusive Eastern tune with the swishing of the hot wind of the desert. It is amusing yet discreet enough so that you don’t get tired of hearing it, however long you play.

The gameplay itself is an adventure. Despite not having any free spins, the slot offers you plenty of chances to boost the number of your reward as the Twister rages on the reels. Definitely a gem among the video slots, “Tut’s Twister” can be played at bitcasino both for free in the Fun mode, and for bitcoins, which the generous King Tut can turn into a pile of gold with just one lucky spin.

Can't find what you are looking for on our site? With 1000’s of products in San Diego we are working hard to get to them all. Suggest a Product and we will get right on it! Click the Suggestion Button and let us know!

Get in touch with us for the best quality cannabis

With the burgeoning cannabis industry on the cusp of national legalization, the amount of information out there can be overwhelming. Visit SD Cannabis Reviews for your most trusted source of cannabis information.